Digital Matte Painting and its Role in the Film Industry

Matte painting is most likely in every film you've seen

So you watched Lord of the Rings and you are blown away with such creativity. Questions such as where was the Rocky Mountains shot or perhaps how was it done never fail to pop up in your mind. Worry not, ever heard of Visual effects or VFX?

You have also watched Harry Porter and you never fail to ask how those amazing scenes that thrill you were made? VFX is still the secret. A transition from the era of traditional matte painting to the Photoshop era is the secret to be uncloak.

The year 1907 is a memorable one in the film makers community. Norman Dawn, in his movie “Missions of California” improvised the crumbling California mission by painting them on a set of glass. Norman was working on one of his movies in Los Angeles. He was however, disappointed as the picture he shoot did not come out satisfactorily as he had wanted, in particular, the presence of a telephone pole. Been on set with a colleague of his, the colleague advised him to have a re-shoot of the picture but this time he should bring along a glass and a painted diagram of a tree which was subsequently used to block the telephone pole. This act marked the beginning of Matte painting in the film.

Several schools of thought believed Norwan was not the original inventor of this artistic concept but was only the first to apply for its credit. This method has long been in existence since 1898 when George Melies often use this technique for his movie. Notable among this film is 'Four heads are better than one' where he made use of this technique.

Matte painting is a painted representation of a set or location used to create a seemingly present environment in a film or movie. It is used by an artist or matte painters to create an illusion of a present location in the movie. However, it is used in conjunction with live-action footage to create a desired landscape and action. It should be noted that traditional matte painting in the movie is stationary. They are often used to replace a seemingly impossible or very expensive location or landscape. The creativity of the artist is an important factor which play out in the beauty of the work. This in alignment with the technician skills are factors needed to produce a seamless animated movie involving both a matte painting and a directed action. 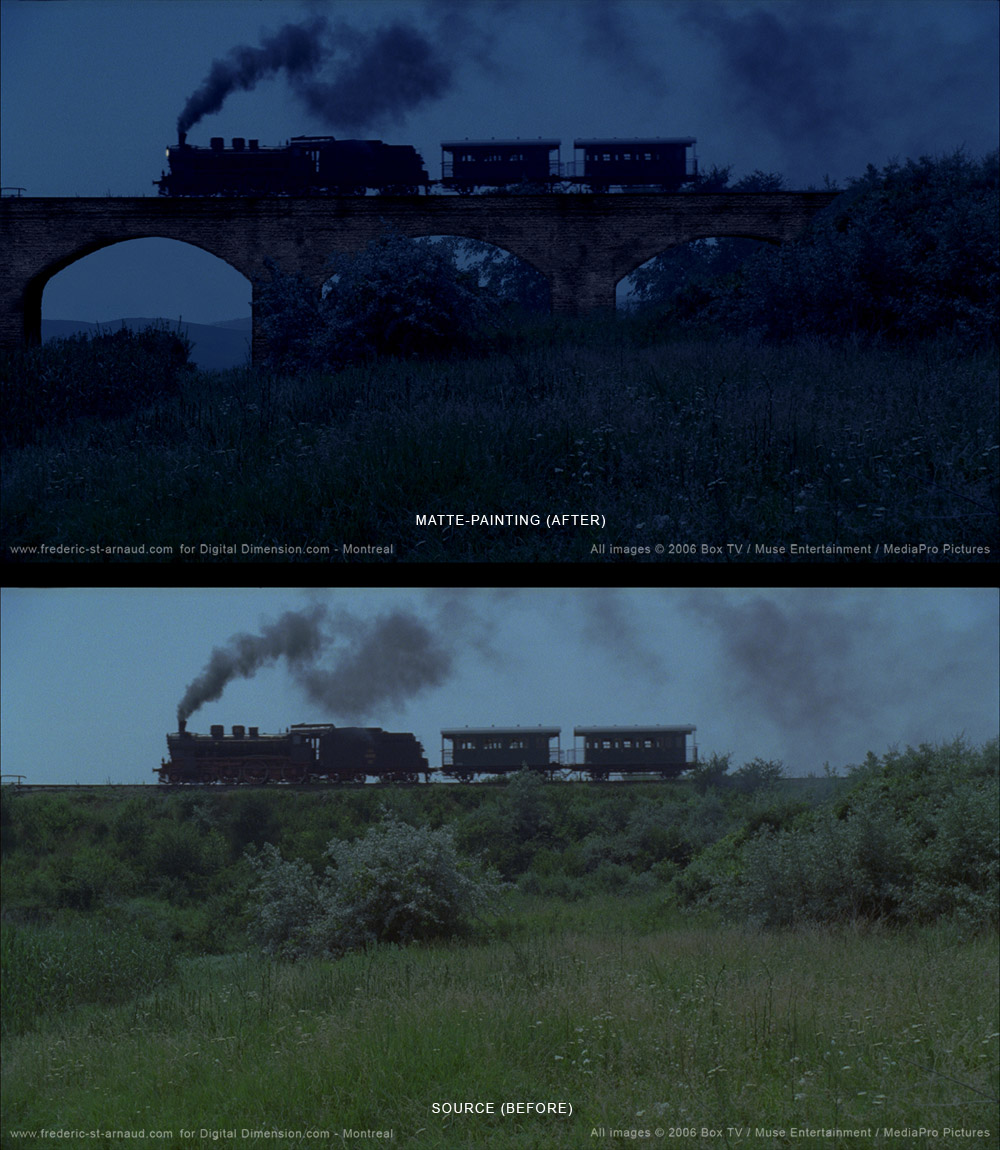 Traditional matte painting in the movie is usually done by creating a painting of the desired landscape on a sheet of glass which is then used to depict the projected landscape. Notable films such as the Wizard of Oz, City Crane all made use of the knowledge of glass painting to illustrate a certain set and location within the movie.

The popularity of traditional matte painting continued until the 1990s although there was a birth of digital matte painting in the year 1985 with the introduction of computer graphics animation in the movie Young Sherlock Holmes.

Matte painters such as Michael Pangrazio, Mathieu Raynault, Norman Dawn, and Albert Whitlock are notable icons whose work propagated the use of matte matting in the movie.

The process of performing a traditional matte painting in the movie include the mounting of a sheet of glass which is subsequently attached to the camera front. Afterwards the matte artist blocks out all the screen parts to be replaced with live-action footage integrated into the movie by the matte painter and the director after test-running to the desired taste.

This process is also known as Norman's process. The process is a product of several trials by Norman after the completion of the 1907 movie 'Missions of California' where he first had the knowledge about the traditional trick.

With the growing pace of technology, the entertainment industry has grown past the years of traditional matte painting and the era of digital special effect is where we are. It isn't an understatement to say that the world is in the process of being digitalized, a complete heaving which would make traditional methods of performing a task or carrying out a particular assignment to become obsolete. The birth of Photoshop which is capable of creating the stunning digital effect is the latest positive trend for an artist to produce a stunning cinematic movie which would not only capture the mind and attention of the audience but would also ensure that all effort contributed towards the success of the work is appreciated.

There is perhaps a transitional phase between traditional and digital matte painting but coming in between is an interphase known as the Williams Process. This VDX technique was named after Frank Williams. William's process was popular throughout the 1920's and the 1930's and form the foundation for what is now known as digital matte painting. Frank Williams method broke into the public attention in the year 1918. Frank method of combining black and white picture of actors was formed out of combining original and negative image of movie shoot. Williams method was the name to reckon with in the year 1933 with the famous movie 'the invisible man'. This technique preceded the new era of digitalization where most processes have been computerised with the use of various applications performing the basic manual processes.

The modern digital matte painting has however replaced the traditional one, with the use of both digital 2-D images and 3-D computer animation which replaced the black traditional matte painting with blue or green backdrops. The matte painter in unison with the movie director creates a concept art which is drawn using two techniques. Some matte painter uses Photoshop to produce the desired visual effect while some draw it using pencils, paper, and pastels in the movie. Photoshop matte painting begins with a search for reference material which could be mountains, seas or any desired material that best depict the concept art. Further digital effects are added to the material. Both 2D images and 3D images are being used for digital animation with the 3D computer animation leading in recent times. Several movies have used the modern digital matte painting such as Game of Thrones, Lord of the Rings, Harry Porter.

Digital animation is adding an extra touch of artistic effect to movies and it give movies an extra touch of creativity. While the use of digital Visual effect could be in form of 2D images or 3D images, it is expedient to note that they only serve as background for further artistic effect. The introduction of software such as Maya as further cause advancement in animation. Digital images are no longer limited to 2D images as there they are combined with 3D models to create the desired part of what is to be projected. The use of painted images though rare has not completely gone into extinction with its significance still highly valued by some movie directors and matte painters. There are cases of the painted images printed on canvas and used as a physical backdrop has been done in Harry Porter. The combined effort of the technician and the matte artist contribute immensely to the success of the story being told. 3D models makes it easier for a matte artist to link the present world to a futuristic world where the impossible doesn't exist.

The entertainment industry is dynamic in nature with different stories to tell. The difference in the story is further made a complex with the variety in personality to be used. The texture and colour of the location to be used is also a top priority on the concern lust all of which must be attended to. From the traditional to the digital era, Animation has been of great help in helping to improvise for the impossible to really showcase to the targeted audience.

Could we say that animation is the link that negates the belief system of impossibility? We wouldn't be farther from the truth with this statement if said anyway. Without much ado, the visual effect has contributed to the growth of the entertainment industry. The place of creativity, originality, and an eye for artistic effect cannot be underestimated for it is the summation of it all that produces the message in the storyline. Movie directors are also grateful for the emergence of digital visual effect which has produced a significant turn-around with their movie.

More Creativity has been injected into their movie and the result is evident in the productivity and public acceptability of the work. There have been several appraisals for different work applauding the master touch added by the Photoshop effect. The world is currently experiencing the wave of digitalization, don't be left out of the positive trend. Give it a shot.